On Thursday 12th April CGC Event Caterers were honoured to cater for the grand opening of the International Bomber Command Centre in Lincoln.

The new £13.5m centre, which took a total of 8 years to complete, includes a peace garden and the Chadwick Centre, which tells the story of Bomber Command through galleries and interactive exhibits. The most striking part of the site is a memorial spire which stands at 102ft (31.09m) high  (the wingspan of the Avro Lancaster bomber) and 16ft (5m) wide at the base (the width of a Lancaster wing). Surrounding the impressive spire are the walls, which hold the names of 57,861 men and women who perished serving in the bomber command.

The grand opening, compered by John Sargent was a grand affair with up to 4,000 guests expected. They listened to a mixture of hosts and artists pay emotional tribute to the veterans who served their country. Unlike the public the sunshine did not show its face, with a thick chilly fog cancelling a planned fly-over for the spectators and veterans. Due to this we were then all the more eager to get the veterans and their spouses into the marquee and serve them some warming Lincolnshire sausage and mash with the help of 22 waiting staff provided by Lincolnshire College. We of course provided pud too, in the form of a treacle tart with strawberry and ice cream with a strawberry coulis.

The weather did not dampen spirits on what organisers have said is likely to be the last formal gathering of the Bomber Command Veterans of WWII. The youngest veteran in attendance was 93, and the CGC staff enjoyed taking the opportunity to talk to some of the veterans and hear their incredible heroic stories. 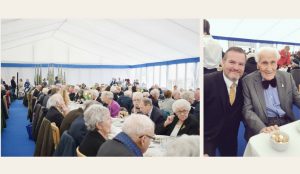