We’re using the fact that it’s National Butchers’ Week (running from Monday 12th March – Sunday 18th March) as an opportunity to celebrate one of our fantastic local suppliers. One of our great success stories of the past two seasons at York Racecourse, a venue which we have been the exclusive caterers at for over 25 years, is our fast food partnership with Ged Bell’s Butchers of York. Not only do they have a kiosk (Ged Bell’s Pies) at the racecourse, but also employ cheery basket hawkers around the course to sell their tasty fresh pies to racegoers.

Only last week did Gedd Bell’s Pies take home the deliciouslyorkshire Taste Award at the Garbutt & Elliott Yorkshire Food Entrepreneurs Awards for their food-to-go concept at York. So here we give you an insight into the award-winning Pie shop at the famous York Racecourse, maybe you’ll try it this upcoming season? 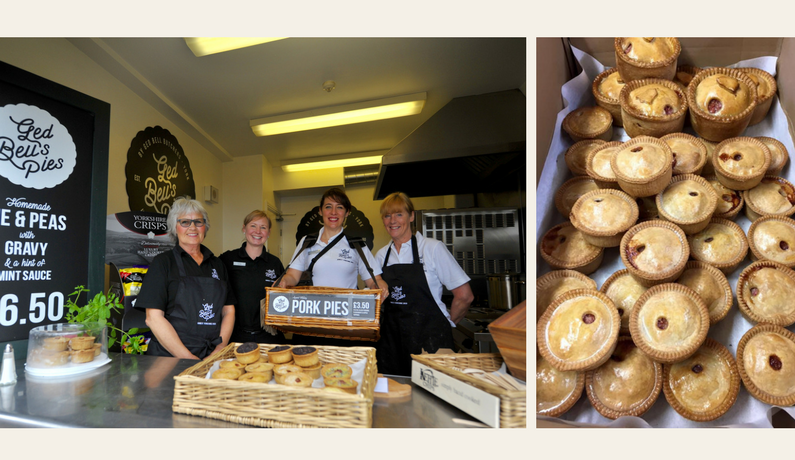 At York the humble pie is reborn as a luxury artisan food stuff. Once a cheap snack shoved in farmhands’ pockets to tide them over their long working day, those times are long gone! The pie is enjoying a remarkable renaissance thanks to its reinvention as the ultimate in trendy snacks, a taste for comfort food that we all have a positive association with. Although the snack suffered from years of bad press at the hands of the anti-obesity brigade, its reinvention as a gastronomic treat has improved its image.

Most ‘Yorkies’ are already familiar with these mouth-watering meaty delights but, for those less acquainted, from just £3.50 hungry racegoers yearning for a tasty bite can choose from: Ged Bell’s Yorkshire Free Range Pork Pies, Aberdeen Angus Mince Beef & Onion Pie, Aberdeen Angus Steak Pie, Yorkshire Free Range Chicken & Vegetable, or even Curried Vegetable. If you are looking for a tasty accompaniment why not add some mushy peas, rich beef gravy or  mint sauce. Found a nice little spot to take in the excitement of the raceday and don’t want to move? Feeling a little peckish? Keep a keen eye out for Ged’s cheerful basket hawkers who became the success story of our best-selling product in 2016 as they sell their wares to racegoers on the wider champagne lawns and numerous bars at the Knavesmire. Busy days can see up to four hawkers, in addition to the static unit, making this delicious product widely accessible. Lovingly crafted using the finest locally produced beef, lamb and free range pork, matured and cut by master craftsmen to give tender, succulent meat with real flavour, Ged’s delicious pies are full of promises…which deliver. No automated machine crimped top for Ged’s pies. Hand finished and mouth-watering with its even bake, golden glaze and succulent, well-balanced flavours, Ged’s traditional pork pie is derived from Yorkshire’s finest free range pig breeder Anna’s Happy Trotters. (Burland, Holme Road, Howden, East Yorkshire). Gloriously pink and porky with just the right amount of jelly, it’s a pastry connoisseur’s delight. There are few locations which can equal that of York Racecourse, and visitors know when they choose to host their event at York Racecourse they will receive first-class service from start to finish.

A history of Ged Bell’s Pies:

Established in 1980 in Dringhouses, just a mile and half from the racecourse, Ged Bell had a vision to build a small family business that would set him, and his young family on a steady path for the future. Ged quickly developed a local reputation for quality meats and award winning pies, earning him the nickname ‘the Pie Man of York’.
The whole family worked in the shop; Lynn, Ged’s wife and his two children Nicola and Lee. As a young 17-year-old, Ged’s son Lee was keen to work in different industries before committing to working alongside his father in the butchers. Lee worked alongside his dad and learned the skills for the trade and in 2004 Lee became ‘Young Butcher of the Year’ and was presented with this national award in London at the Guild of Master Butchers. Three generations now play their part in this much loved family butchers.

Sadly, Ged died in 2006. The devastating effect on the family and community was clear to see and the future looked challenging, having worked in a place where the person you loved the most was embedded in its core and then gone was a hard thing to face. Lee faced the challenge, and took over the business, running it in many of the traditional ways his father taught him but also adding his own stamp, which is what his father would have wanted. Now with a young family of his own, the shop is a way of life for this second generation of Bell’s, and if asked what he wants to be when he’s older, Lee’s eldest son is very sure he will be a butcher and simply loves being at the shop helping cut out the pastry and sampling the pork pies.

Lee’s mother still works with him in the shop, and at Christmas all the family help out. Sister Nicola loves coming back at this busy time of year and Nicola’s daughter Maisie now takes on the role of serving the mince pies as Nicola once did. Lee continues to develop the butchers shop in several ways; since his mum was diagnosed with Coeliac disease a few years ago he has even worked on a gluten free range.

Listen to Peter talk about his dad Ged and York Racecourse:

Here at CGC we pride ourselves in providing freshly prepared local produce to the racegoers at York, regardless of whether eating in one of our self service restaurants, enjoying sumptuous corporate hospitality or attending a conference with a healthy eating working lunch. Offering great Yorkshire value whatever your tastes, whether you want a snack, three-course meal or banquet we aim to have something to suit both palate and pocket, and Ged Bell’s Pies provide you with the perfect option and new for the 2018 season  we are introducing their burgers and sausages, we can’t wait to get our chops around them!

Get involved in the conversation this National Butchers’ Week on Twitter by using the hashtag #NationalButchersWeek. 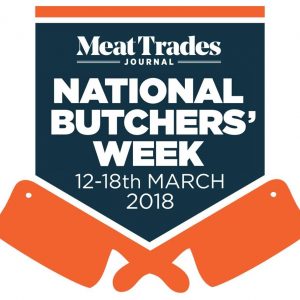