There was cause for celebration around the CGC business a few weeks ago as the winners were announced at the annual National Racecourse Catering Awards. You can read more about what we took home here . A particular highlight was the moment our Managing Director, Darran Coulson, was presented with the ‘Catering personality’ award for 2017, a great way to mark his 30th year in the business.

There aren’t many catering companies that have been around since 1900’s and fewer still that can boast a Managing Director who has been with the business for 30 years! Darran began his career with CGC Event Caterers, or Gilpins as it was known then, in November 1987, starting out as Senior Assistant Manager of the Mansion Hotel in Roundhay Park, Leeds. Darran was aged 21 and prior to that had grown up in his family’s pub and worked both as a food & beverage assistant and head chef for Hull’s North Country Brewery – a fine path into the industry.

Just two years in and Darran was asked to take his catering expertise across to Phoenix Park Racecourse in Dublin. This was to be Darran’s first management position specifically overseeing food and beverage in a horseracing venue, a venue that was home to one of the biggest races in the world of the time – The Cartier Million. 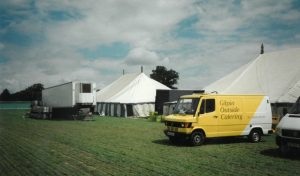 When Phoenix Park closed in 1990 Darran, at just 25 years old, was brought home and promoted to Operations Manager of the outside catering division which was, at the time, a small division catering for just 2 racecourses, a number of weddings and dinner parties, and some office catering – the division had a modest turnover. One year later and Darran was appointed overall Operations Director, a role which he would hold for 20 years, overseeing the growth of the business and leading innovations in the racecourse catering world – Darran, Anthony Gilpin and the team were the first to introduce grand buffet style catering at a racecourse, unveiled at the opening of the Ebor stand in 2003 and heavily inspired by cruise ship catering with ice carvings and an enormous array of choice for racegoers. Go back further than that and Darran remembers proudly the opening of the Melrose Stand at York in 1989 “it was THE stand of the time and a building that so many other courses admired and replicated in many ways. To think that this stand is planned to be redeveloped soon seems unbelievable, the opening seems like yesterday”.

In 2012 Darran stepped up to the role of Managing Director but, as with so many of the senior team at CGC, remains heavily operational and very close to the day to day runnings of the business. He now also has an even larger role as Senior Vice President of Operations for SMG Europe following a buyout by one of the largest operators of sports and entertainment venues in the UK and Europe in early 2015. 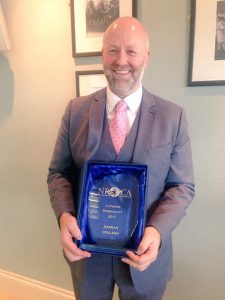 Fast forward 30 years from Darran’s first day and the business is unrecognisable in so many ways, exclusive racecourse catering contracts have quadrupled and CGC’s catering expertise spans ever more venues, sectors and regions. Ask Darran what he is most proud of though and he’ll tell you it’s the developing and mentoring of his team that is his real passion – so many of the senior team have themselves grown with the company, each completing more than 20 years’ service and each progressing through the ranks and having worked as racecourse catering managers. Darran’s restructuring of the business has positioned these seasoned pros as Divisional Heads – each responsible for a different area of the business.

Darran’s self-confessed strength and weakness is that he never looks back, not to dwell on the past, but to keep moving forward, looking at how he, his team, and the business can always improve. “I’m a perfectionist, I’ve never done a perfect job yet, the day I do is the day I’ll retire.”