The Sun Pavilion, Harrogate celebrates 20 years since Her Majesty The Queen’s visit

A reason to celebrate

Elderly members of the community along with representatives from local businesses, Harrogate Borough Council and friends of the venue were invited to celebrate the 20th anniversary of Her Royal Highness Queen Elizabeth II reopening The Sun Pavilion in Valley Gardens following extensive refurbishment works. The event, featuring a traditional tea dance as a nod to the venue’s original use, was first conjured up by the team in an effort to combat loneliness this festive period. The team at The Sun Pavilion chose to organise this very special event, held on Monday 10th of December, as a way to give a little back to members of the elderly community and to celebrate Harrogate’s history and the venue’s role within it.

The tea dance, which was free to attend for invited guests, ran from 12pm – 3pm and included afternoon tea courtesy of the venue’s in-house caterer, CGC Event Caterers as well as regional favourites Taylors of Harrogate who kindly contributed their delicious range of teas. Sally Daly, Event Coordinator, said of the occasion ”We are incredibly proud of The Sun Pavilion’s heritage and wanted to celebrate it whilst also doing something nice for the elderly community, many of which will remember The Queen’s visit to Harrogate and The Sun Pavilion and what a fantastic occasion it was for the town. A number of the attendees remember fondly the event in 1998 and were able to share stories and photographs at yesterday’s gathering which was really lovely. It’s also an opportunity to celebrate the fact that the venue continues to be very well utilised, these days as a popular wedding and party venue rather than a tea dance venue.”

A jewel in Harrogate’s crown

The Mayor and Mayoress of the Borough of Harrogate, Councillor and Mrs Bernard Bateman were in attendance as well as members of The Friends of Valley Gardens. The Mayor said of the event “The Sun Pavilion is the jewel-in-the-crown of Valley Gardens and I was delighted to join the celebrations. A tea-dance was a very fitting way to mark 20 years since the refurbished building was re-opened. We are so fortunate to have such a magnificent venue in the district.”

In the right image: The Mayor and Mayoress of the Borough of Harrogate, Councillor and Mrs Bernard Bateman.

Paul Cairns, Chairman of St George’s Dance Club, volunteered to orchestrate the tea dance, having also danced for The Queen at the original event in 1998. This year’s gathering marked 20 years to the day since HRH Queen Elizabeth II visited Harrogate, the first official duty of the day being the re-opening of The Sun Pavilion. Local Historian Malcolm Neesam, who was seated next to The Queen in 1998 as she enjoyed refreshments and watched the dancers was also present at yesterday’s event “Almost from its first opening in 1933 the Sun Pavilion has been a venue for dancing, and this became an important source maintaining high morale during the difficult years of World War Two. I well remember the dismay felt in the town when in the 1990’s it was nearly demolished, but thanks to the efforts of the Friends of Valley Gardens it was saved and restored. The Sun Pavilion tea dances were an essential aspect of the campaign to restore the Royal Hall and it is great news that this tradition is being continued by the present marketing team to mark the twentieth anniversary of the Sun Pavilion’s re-opening by the Queen in 1998.”

In the right image Archive clippings courtesy of Anne Smith, Friends of Valley Gardens, in the left image tea donated by Taylors of Harrogate.

The Sun Pavilion is situated in Harrogate’s Grade II Listed Valley Gardens. Built in the 1930’s and, once threatened with demolition, boasts original Art Deco features and is available to hire for all manner of events including weddings, birthday parties, charity events and private celebrations. 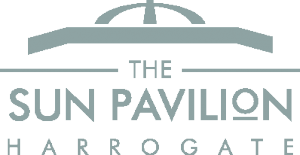